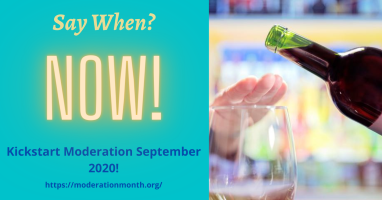 (For newer stories, see the MM Public Forum at:
http://forum.moderation.org/forum/mm-forum/mm-public-forum)


So to those of you, .how the hell do you make intelligent seperation decisions, read the 9000 books on the subject, find work, cope with a 5 year old, deal with the emotional stress, and stay sober… >>

First thing is to take a deep breath!!! Stand back from things & think about 1 or 2 things that you could do that would make the biggest difference in your life. When things look so overwhelming, it can be hard to know where to start because you want to change EVERYTHING…and RIGHT NOW!!! But I'll bet you can think of a few things you could do that would positively impact your life immediately. (Try to spend most of your time working on these things.)

Unfortunately, you can't fix everything in your life at the same time. (I've tried…didn't work. However, you might be surprised how much other things improve once you start changing the things that are having a negative impact on your life.) So, when I decided I had to change my life, I realized that nothing else had a chance of getting better until I addressed the issue of my drinking. That became my #1 priority. I have spent a lot of time working on this (& occasionally have worried that I'm neglecting other things), but I kept reminding myself that nothing else I wanted to achieve would ever happen unless I learned to moderate my drinking.

Now it's been over a year since I found this list. I can't tell you how much I've changed!!!! (In all areas of my life!!! New good habits, new interests, NEW ME!!!) And finally I'm able to start focusing more on other goals. (Not that I feel that I've completely conquered the drinking problem!!! I remain VIGILANT!!!)

So, my advice to you is to find some time when you can be alone, & really ask yourself WHAT DO YOU MOST WANT from life? Do some brainstorming. Then, when you really have a gut feeling of what's most important to you, think some more…what will it take to get that???

This is such a diverse group of people here that I'm sure someone will relate to your life situation & be able to give you more specific ideas, etc. But it will always be your life…you have the opportunity to reinvent as you would like it to be.

You asked if the behaviour can be changed.  The answer is simple -
yes it can.  In may case it has changed.  I now have a senior job in
a university, live a fulfilled life with my partner and drink
moderately.  But it has not been easy. It has meant changing a whole
way of regarding and living in the world. Not just changing
behaviour, but mindsets, attitudes, assumptions, friends - in fact,
nearly everything.   Remember I was someone who could drink
constantly night and day for 5/6 days. 2 weeks was the maximum.  Now
it seems no longer a problem.  I can take it or leave it. I drink
about 2 glasses of wine maximum. But, and here is the funny thing, it
is no longer a feat of will power. I have just grown into this kind
of person.

Of course, I realise that things could always take a step backwards.
But I remember years ago in AA, when I was not drinking, I just
thought about the ability to drink all the time.  I suppose now I
realise it is up to me, I just don't bother any more.  I'll be
drinking champagne with friends tonight, maybe even half a bottle,
but I know now I will not get pissed and I'll wake up tomorrow able
to live another day. I could not have said that a couple of years
ago.

Great list! Last fall I posted something similar. I called it "Saying Yes."
Bottom line is…every time you make a choice to say "yes" to something,
you're saying "no" to something else. OBVIOUS, I know!!! (But it's sometimes
the obvious that we overlook thinking it too simplistic.)
So, this applies to the choices we make about drinking as well. If we say
"yes" to drinking (for those abstaining temporarily or permanently) or
drinking immoderately, what are we saying "no" to?

Here are some of my answers:

1. Accomplishing what I want in life

3. Having the time or inclination to do those things I used to enjoy
(hangovers are a BITCH!!!)

4. Staying at my desired weight

7. Keeping a sense of humor

9. Self confidence & self esteem

choose to drink too much.

I can relate. I don't know who came up with the saying
"angels watch over fools and drunkards" but I thank my
lucky stars its true.

It's all a mind thing. We shouldnt ever feel we are being "deprived"by
not drinking so much, but think of the beautiful  things we go thru when
we dont.

I don't mind being deprived of:

Shame at my lack of control.

Fear of my lack of control.

Anger due to my lack of control.

Falling off the roof while cleaning the gutters.

Giving the grass, that oh so chic crew cut look.

Blowing up the BBQ.

Giving a convoy of trucks the finger cause they're going too fast.

Wondering where the weekend before went.

Waking up wondering if my neighbour is still speaking to me.

Waking up wondering if my wife is still speaking to me.

Waking up wondering why my dog is giving me dirty looks.

Waking up wondering where the 100 bucks I had in my wallet went.

Visiting the porcelain king in the morning.

Painting everything except the wall.

Spending the next day fixing the paint job.

Waking up at 4 in the morning in a cold sweat and having an anxiety attack.

There's more. But lemme start working on what I *do* mind being
deprived of.


We are often times stronger than we think. I used to play tennis a lot and remember being told to try and hit a ball even if I didn't think I could hit it because sometimes I WOULD hit that "impossible" shot. I was surprised by how true this was. And this can be applied to so many areas of life.

When this topic came up, it occured to me that I hadn't really "let go"
of excessive drinking yet. Even when moderating or abstaining, it was
still very much with me. So I held my own "memorial service." I wrote
the words "Excessive Drinking" on a slip of paper, lit candles, said a
eulogy. Then "cremated" it. I even put the ashes in an decorative little
box I had received for my birthday, then wrote an obituary for my dear
departed friend "ED". I was going to post it, but chickened out. I know
it sounds really weird and silly, but it was actually kind of fun. It
hasn't made everything easy for me, but I do feel stronger and more in
control of my problem than I have in years.
**********************************

As Fred mentioned, this forum gives one the opportunity to deal with alcohol issues,   it also provides an opportunity to deal with the conflicts of daily life.  By learning that it's okay to disagree, that it's okay to speak you mind is a powerful realization.   It gives us permission to be ourselves, to be human beings and to differ from others.  It also gives us a chance to see that by expressing our angers, irritations, and so forth that, maybe, just maybe, we won't feel like numbing ourselves out with alcohol, food, etc.

I find that very liberating.

I can totally relate to the
difference between intellectual discipline and visceral desire. Ever
since I joined this list over a year ago, I have made slow progress, and
eaten a LOT of dirt, on the journey to moderate drinking. But it wasn't
until last August that something clicked for me and I just didn't want
to drink like that any more. I felt it in my heart and my gut, instead
of just my head. Sure, I've eaten some more dirt since then. But I get
back up much quicker now. And I find that while I enjoy the drinks I do
have these days, if I am tempted to have one more than planned it
doesn't do anything for me, and I don't enjoy it that much.